If you are new to this site, you should first read my How I Cured My Silent Reflux article as it explains the underlying root causes of acid reflux, its corresponding treatments, and provides the necessary context to follow some of the concepts in this episode. Note that the concepts in the article apply to acid reflux, GERD, and Silent Reflux. After reading that article, if you would like to learn more you might consider my book: 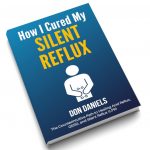 For a comprehensive / easy to follow plan, additional rationale, and the steps I took to resolve my reflux, get my #1 best-selling book 'How I Cured My Silent Reflux | The Counterintuitive Path to Healing Acid Reflux, GERD, and Silent Reflux (LPR).' Also available in audiobook! 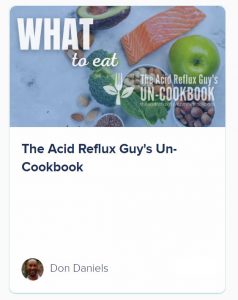 Let's face it, its incredibly difficult to know what you can and cant eat as it sometimes feels like everything triggers symptoms. A list of common reflux triggers is hit or miss, so where do you start to determine what is safe to eat? Furthermore, how long should you expect to maintain this diet and are you even making progress?

We will discuss these challenges and potential solutions in my new online training course "The Un-Cookbook." I have released the first of three modules and you can get it now for a limited time, at its introductory price. As the additional modules release, the price will be updated. Enroll now and you will gain access to the new modules at no additional cost!

(Note this is not a word-for-word transcription - it's loosely paraphrased. Alternatively, feel free to watch on youtube or listen on your favorite podcast app here).

So, a little backstory on me. Many of you probably have read my book ‘How I Cured My Silent Reflux,’ this is a book where I talk a lot about the 15 years I dealt with acid reflux, GERD and silent reflux. I share with you a lot of personal stories of dealing with some of the challenges associated with those diseases.

However, in that book I didn’t really talk about a lot of the time leading up to that. And so, what I wanted to do as a quick introduction to me is to talk about some of the early years building into acid reflux. Many of you know it typically tends to be a bunch of risk factors that stack on top of each other that can kinda get you into a point where you’ve got a gut health issue which can then spill over into many of these gut health related diseases.

If I were to take a step back and take a look at some of my early years, maybe even ask my parents one of the things they would say is I always had a bit of a cough. So if I were to think about what were some of the major events in my life leading up to my reflux, in my early adulthood. I can think of at least three things. I don’t know for sure which of these, but most likely it was a contributing factor that moved me down this road.

So one of the things I dealt with early on was an insatiable apatite for candy. I ate every piece of candy I could get my hands on . In particular in middle school when I was old enough to walk home from school I would walk and take a detour to this place called the country store. My dad was in the military so I could buy candy tax free meaning I could buy a couple pounds of candy for just a few bucks. So that really poor eating habit, all the refined sugar associated with that was something that stayed with me through most of my adult life. It got a little bit better, I didn’t eat a pound of candy at every setting but I continued to eat the sweets. And those things as you know, over time can contribute to poor gut health.

Another big factor for me when I was growing up is I took 9 months of tuberculosis medication. This is an antibiotic and is something that’s done when you have an exposure to TB. Didn’t even have TB, but its something that is done preventatively to avoid contracting TB. Many of you know that taking antibiotics can have a lot of unintended consequences such as killing indiscriminately both good and bad bacteria.

In particular long course antibiotics such as what I took for 9 months is never a good thing. Typically, if you’re going to be forced to take antibiotics or you want to take them as a last result you’re really looking for narrow band short course antibiotics and you want to offset it with healthful eating habits, probiotics that your doctor can prescribe to keep your overall balance in check.

Going back, even further I was weaned at an early age an put on formula nd if you’ve studied anything bout the microbiome you know that the first three years of the microbiome are absolutely critical. So any changes in diet or moving away from the absolute best diet for an infant (mothers breastmilk) and things like formula can spawn a negative change in the microbiome

Those are the three things that come to mind. There tends to be other factors and it tends to be layer cake. The body is pretty resilient but after a number of risk factors builds up you can get a dysbiosis which is the leading irks factor for gut health issues. You can then span acid reflux which is one of many side effects of gut health issues.

Fast forward into early adulthood: poor diet, stress, and then my first appointment with a doctor for what at the time was indigestion became a prescription for proton pump inhibitors (PPI). PPIs as you know can compromise digestion, lower acidity, create additional pathways for pathogenic bacteria to overgrow. They can deepen your symptoms and your reflux. This is what absolutely occurred for me. After a couple of weeks I could no longer go without the medications. That just started me down the 15 years of acid reflux and GERD.

Ultimately, I got to a point where I had silent reflux due to some really poor dietary choices. As I would end my day at work I would grab a handful or two of winto-green lifesavers and pop those. They were great because I could crunch them on the way home. One day I got a handful, put one in my mouth, crunched it and it hit the bottom of my stomach like a ton of bricks. Then my nose started to run… I just thought maybe I had a cold and sure enough within 24 hours it went away and so I just chocked it up to a 24 hour bug. At the same time, something in back of my head told me it was associated with the candy so I stayed away from it for a couple weeks.

About two weeks later, I decided to go for the candy again. This time, I got the burn, my nose started running and it just never stopped. Between that, post nasal drip and the other silent reflux symptoms I was in pretty bad shape. After about 6 months I had had enough and based on at tip from a family friend I began to research reflux and its underlying and contributing factors.

After healing my reflux, I was inspired to share my journey via theacidrefluxguy.com. Since starting that site in 2020, I’ve had hundreds and thousands of people reaching out, expressing thanks for sharing alternate view to the mainstream medication. after a bout a year of hearing form so many people who had received so much poor advice as I had I decided to write How I Cured My Silent Reflux and really codify what I did to heal my reflux.

Probably the biggest question I’ve received since releasing that book is ‘What do I eat?’ I resisted for long time, creating a cookbook. I’m still resisting creating a cookbook. So what I’ve done instead is create the un-cookbook. I intend to create a training course, but also a book and share my experience over the last 15 years. Everything is based on research that I’ve been able to pull form medical journals, scientific articles, studies, meta-studies so it tends to be backed by a lot of objective information. Hope you find this helpful!

Founder at The Acid Reflux Guy
Don is a best selling author of 'How I Cured My Silent Reflux,' and a former acid reflux sufferer for more than 15 years. With several family members with the disease, and a medically diagnosed hiatal hernia he resigned to the fact that he would take acid blockers for the rest of his life. Dissatisfied with medical advice, he researched the root causes of acid reflux and by solving them was able to eliminate his acid reflux for good!

I’m so thankful to find you! I had the worse acid reflux last night. A mouthful of acid woke me up! Hours later my mouth and throat are still burning. I thought my chronic PND was the problem, filling my gut with mucus. I did a search on mucus and acid. You came up! I scanned a few articles. When you mentioned the vagus nerve, you had me! In my past I’ve had vasovagal syncope episodes. So that nerve is not working as it should. I’ve had several doctors tell me my allergy issues are actually gut issues. So I… Read more »